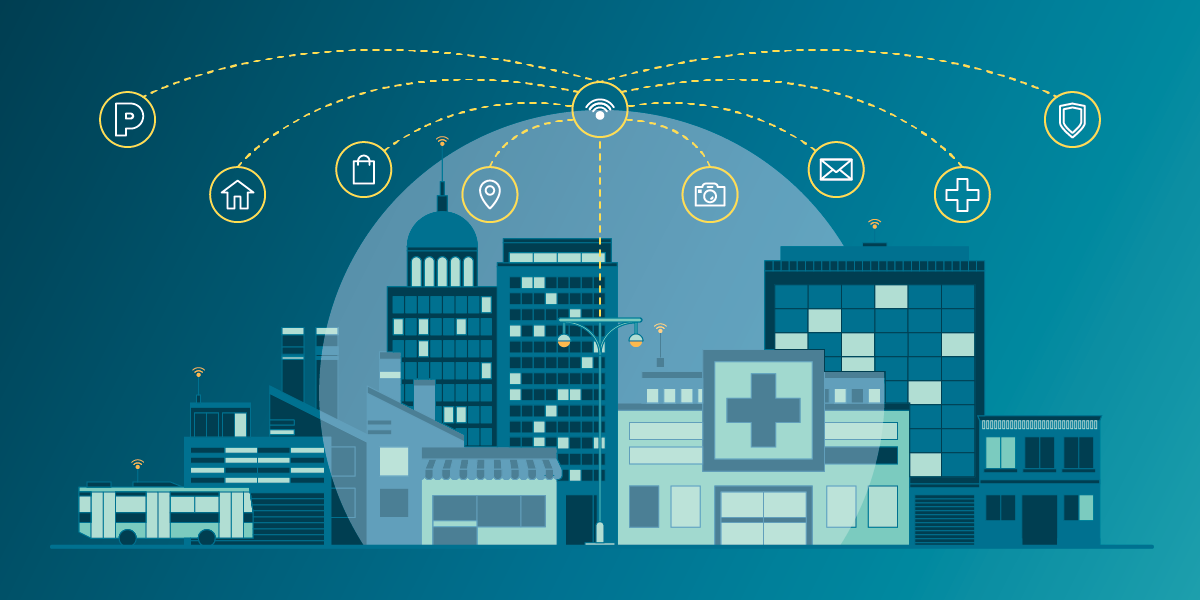 Hey, are you aware your city is dumb?

My city is dumb? How dare you?! Ok, maybe sometimes I get annoyed searching for a parking spot for half an hour, or when the dumpsters are so full I can’t throw away even a tissue. Ahmm...there are a few things, actually, now when I think about it, that make me feel like my city isn’t made to suit my needs. In a sense it’s inefficient, some solutions being outdated. It could use some innovation. You think we can make it smart?

Yes, definitely, emerging technologies can do wonders for city life. By 2050 it is expected that around 60% of the population will live in cities, and we need to make our surroundings capable of handling such a large number of people. I’ll tell you about smart city features already implemented in the world, and some with great potential. First, let me tell you what makes a city smart.

A city is considered to be smart when it’s able to evolve by using the best tools in order to make the lives of its residents easier on several levels. Smart city uses technology collaboration to make public utilities like parking, transportation and waste management, emergency services, street lighting, security etc., more efficient and optimized. When someone is smart, he or she knows how to use available information to make the most out of it, right?

Ok, I get it, but which tools and how?

Digital and communication tools connected via an intelligent network, collecting and using data. Huge amounts of data. Smart city technology relies mainly on IoT to create an information-driven, connected base. Internet of Things tech ties everything together, mainly via sensors, enabling the gathering of data which will serve everybody to make the city function better. Robotic process automation and artificial intelligence are clearly in the core of future cities. To upgrade old school habits and to give birth to completely new possibilities.

Ok, but give me an example!

Sure. In San Diego, the city of smart lights, there are 3000 LED streetlights all connected by a WiFi signal. In that way, they are remotely controlled, they last longer reducing maintaining costs, and save energy. Soon, there will be more intelligent streetlights which will oversee parking spots, check for illegal activity or even measure air humidity thanks to built-in sensors, cameras, microphones, WiFi and Bluetooth. People will be able to check via smart city applications on their phones if there is an available parking place in the street they are headed to thanks to the real-time data. Would you like that option?

Yeah, it would save me so much time, and there would be less congestion, less cars circling the streets, and consequently reduced pollution! What else, what else?

You could check when your bus arrives, because the public transportation is also a part of a smart network system by providing the data about its location. In Australia, the buses are a priority in the rush hour, so the traffic lights adapt in those periods to make sure public transport runs smoothly. Moreover, if an emergency room gets the data about a traffic accident via smart app, they could send their vehicle faster.

Did you mentioned something about garbage management?

Yes, in Chicago they use predictive analytics to keep track of the overflowing of the dumpsters so they would be emptied as soon as possible, and to detect the best location for rat traps. Thanks to that data, Chicago is now 20% more successful at dealing with rats problem.

In the city of Songdo, South Korea, there are no garbage trucks. The garbage is transported through an underground pneumatic system. Cleaner and faster.

And safer? Are smart cities safer?

They can and should be. For example, there are sensors put into abandoned houses to react and send a notification to the fire department when smoke detector activates. Fires are common in such places and sometimes people from neighboring houses notice the fire too late, but with the addition of those sensors, they are much safer. There are also sensors in Chicago which alert the authorities when the bridges freeze, which can prevent many accidents.

I understand, sounds really useful, but how can my old-fashioned city adopt all those smart solutions? Does it need some preparations?

Good question. A city which plans to become smart, needs to have an open infrastructure. It means it must be capable of adjusting and improving in order to create safe paths for citizens to engage. To fully use the potential of the ultimate technologies the physical, technical and legal obstacles need to be surmounted. Smart city infrastructures are the result of government and businesses working together to make a secure and consistent data network. Open network of partners, open APIs, open source coding – the more open the better. When you want to implement some new city service, you won’t go destroying the old equipment every time, but add it or make adjustments to an existing foundation.

Hmm...so it takes time. It’s a step by step process, I get it. But, you think smart cities would last?

Survival of intelligent cities depends on its sustainability. You have to address sustainability issues if you want a truly smart city. How can we say we are creating something better if we do not pay attention to the energy sources. Smart cities have to generate power within their own boundaries from renewable sources and develop a smart grid in order to track and efficiently match the supply and demand. Solar panels, electric vehicles, LED lights, anaerobic digestion etc., are practices that future cities must use to make themselves sustainable and beneficial for its residents.

Ok, it makes sense. Now I see why you called my city dumb. There are so many innovations that can be implemented to make urban life easier. IoT, AI and data combined make cities more efficient, cleaner, healthier and safer. Thanks for the info, I’ll see what I can do to make my city smart!

You are welcome! I see you support innovations and smart future and I hope this topic inspired you, so I will suggest you check out Innovation Cloud if you are in need of a reliable tool to capture and manage new ideas efficiently.

And sorry for calling your city dumb.