Innovation Cloud Help center What can we help you with?

Contributors can add ideas, be involved in Idea folders and Discussions, as well as collaborate on ideas by voting, adding comments, documents or images.

Scorers are users whose task is to evaluate and score ideas. If the idea is not good enough to be scored, they have the possibility to Send the idea back to rework for further clarification.

Approvers are users whose task is to make a final decision on ideas based on the information gathered during the collaboration, scoring and the documents provided.

IMPORTANT: Only the Administrator of your Innovation Cloud account can apply roles. Each user can carry only one role.

To set roles to users,please go to the System settings > User management. The list of all the active users will appear on your screen. Apply a role to a single user or to multiple users by marking the desired user(s) with a checkbox and clicking on the Assign role button located on the top of the All users list. Choose the role you wish to assign to a user from the role list and click on the Assign role button. 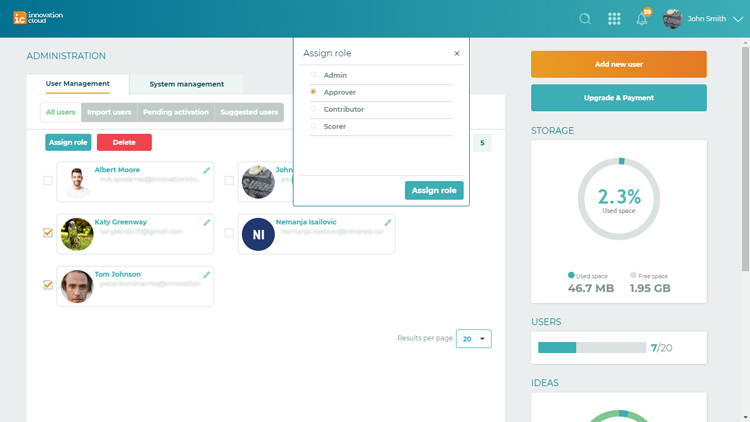 Note: You can set a role to a single user by using the Edit option, the pencil located on the right side of the single userbox. See the Edit user details. The role also can be set during the process of Adding users to the platform when filling the user details.